William Lane was a small farmer in West Haddon around the time of the fire. He had two daughters. The elder, Mary, married Thomas Knowles in 1663 and all attempts to trace any record of the couple thereafter have so far failed. A few months after the wedding his wife Dorothy died, leaving his younger daughter, another Dorothy, to keep house for him while he was out in the fields.

But by 1666 (the year of the Great Fire of London), Dorothy had caught the eye of a young man from Crick, and marriage plans were afoot. While the bride and groom were perhaps gazing into each other’s eyes, their fathers got down to business…

It was customary at that time for the bride to be given with a dowry or marriage portion. It may have been quite small – as little as £5 has been recorded in some wills – but if the family could possibly afford it, it was the respectable thing to do. (One factor in the origin of the white wedding dress – before it was made popular by the young Queen Victoria – was the tradition of being ‘given away in a shift’, signifying the bride coming to her husband without a dowry.)

But Dorothy Lane didn’t have to worry about walking up the aisle in her nightie. Her father and future father in law, a weaver called William Parker, had an agreement drawn up whereby William Lane’s house was put into trust for the benefit of Dorothy and William junior and any children they might have. A sum of money may also have changed hands, but there is no record of that.

Neither is there a record of the marriage in the West Haddon parish register, but we can be sure they were married, because in February 1668 there is a record of the burial of Dorothy, wife of William Parker. Was this the result of a complication in a first pregnancy? Before the year was out, Dorothy’s father was dead too, leaving William Parker junior in possession of the house. 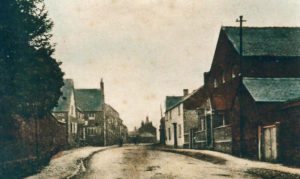 He may have lived in it for a while, but in 1670 the parish register records the baptism of a daughter born to William and his new wife, Grace. And in that same year William sold the house to Edward Page, a baker, for £39.10s.

During the course of the 19th century a Baptist church was built to the west of the property and a Wesleyan chapel erected behind it. Though the chapel has since been demolished, the house retains the name ‘Wesleyan Cottage’.