The Spokes family had been farming in West Haddon since the first Queen Elizabeth was on the throne. By the 1630s there were several branches of the family.

George was the son of John Spokes, who died in the spring of 1636, very shortly after making his will, so he may have been aware that he was dying (but we don’t know what of.)

John’s will has survived, along with a probate inventory, listing all his possessions at the time of his death. Because it lists household goods in the rooms they stood in, the inventory offers a snapshot of the house George grew up in. It was pretty sparse – quite minimalist. 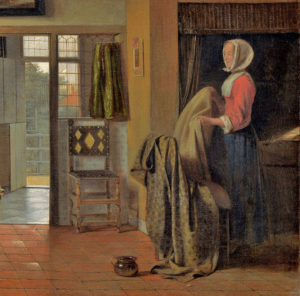 Downstairs there was a hall (the main living room) which had a table, a form (a kind of bench) and three stools in it – no chairs. In the parlour (the best room) there was a bed, three coffers, three barrels and a thrall to stand them on. This was a room for entertaining visitors. It was usual at this period for the best bed to stand in the parlour, usually with bed curtains, displaying the wealth of the family by the quality of the fabric or the richness of the embroidery. (Visitors may have been offered ale, but it seems they were expected to stand.) The kitchen held the usual food-related equipment of the period. But there was only one chamber, or upstairs room. This held two more beds and a couple more coffers. The furniture was valued at a lot less than the household linens and bedding – the table, stools etc were worth ten shillings (50p), the brass and pewter ware £2, while the mattresses, blankets, sheets and pillows, tablecloths and napkins amounted to £8!

John left almost everything to George, with the understanding that he would take care of his mother if they can accord to live together, but if she shall depart from him then she is to have £10 and half the moveable goods within the house.

In the event, the widowed Elizabeth didn’t depart. Her son George did.

By the end of July in that same year, George had made his will, leaving various small bequests, including to his two godchildren and to the poor of West Haddon, and by the end of September his mother had inherited everything else.

Apologies – this should have been posted on 22 August.