Half the house to my wife Alice for life during her widowhood and the other half to my son Edward. The pattern of houses being split between widows and their sons emerges strongly from wills made at around the time of the fire.

In this case Edward Clarke directed that his son, Edward junior, should have the half of the house that had belonged to his grandmother and that he be allowed wood for the new building of that house which is ruinous. This clause of the will suggests a house that had been divided between widows and sons for at least two generations and where general maintenance had been neglected. 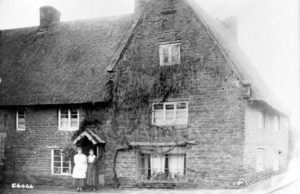 When Edward junior came to rebuild he would almost certainly have had the roof thatched. It was the most common roofing material in village housing at this period. And the upper rooms in most houses would have been open to the rafters too – no plastered ceilings to hold back the flames if a fire took hold.

And downstairs a fire would be kept going in the hearth for cooking, even during summer. At curfew the fire would be banked down for the night, to be bellowed into life the following morning – so much easier than starting from scratch with flint and tinder in an age before matches. But if it went out overnight, it must have been very tempting to pop next door and take a light from a neighbour’s hearth – in a little handful of straw, perhaps.

An order from a manorial court in 1581 laid down that no person shall carry any fire in any wisp of straw, on pain of every time they are seen or taken, 12 pence: to the taker 4 pence, to the lord the rest. 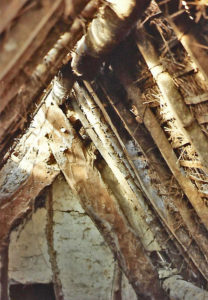 few pennies in it. But people could get careless. And the spring and summer of 1657 were both extraordinarily hot. By August 1st all the thatch in the village must have been as dry as tinder…