The legal case between Samuel Clerke and the charity trustees gives one of very few glimpses of West Haddon at the time of the Civil War. There is already a question over the Vicar, Gregory Palmer, concerning the disappearance of the pre-1653 parish register. The taking of sides became more open in the course of this dispute.

A chest had been bought, with three locks and keys, for the deeds relating to the charity estate. It was kept in a private place in the parish church. Samuel Clerke kept one of the keys and the chest was only to be opened in the presence of himself and the trustees. These deeds would, of course, show just who had been party to the purchase of the various properties and lands. But – 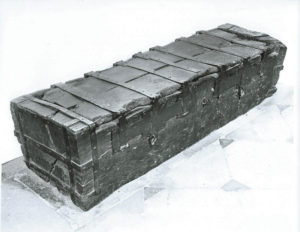 The chest was broken up and the locks broken when the King’s army came into these parts and the deeds and evidences taken away and stolen, which the trustees believe was done by Samuel Clerke himself (he being a notorious cavalier attending the King’s army.) So, in effect, Vicar and village were claiming loyalty to the parliamentary (winning) side. How convenient.

Furthermore, they declared that by the summer of 1647 the church steeple had become so ruinous and in danger of falling that the villagers were compelled to take it down, at a cost of more than £200. To raise the money they had had to mortgage the charity estate. Samuel Clerke, as lay rector, was responsible for church repairs (in return for a hefty annual tithe payment) and he had failed to foot the bill. It is safe to say the relationship between the people of West Haddon and their manorial lord had broken down.

This story has a strange postscript. In about 1888 someone (the famous Anon.) wrote a narrative poem about a parish chest which was printed and sold to raise funds for the church restoration. The story was vague on detail, but concerned lost keys and a chest in the church which was broken open when part of the church stonework collapsed and fell on it. Was this a folk memory mash-up of the dispute and the spire demolition, passed down through generations of villagers?