Samuel Clerke was lord of the manor in West Haddon. He was buried here in 1688 but there is no evidence that he ever lived here. Had he done so he might not have found himself at odds with the freeholders of the parish, leading to  a legal dispute with them in the Court of Chancery. It is the record of that court case that gives us the earliest information we have about the establishment of the West Haddon Charity Estate.

The case is dated 1648 and refers to an initiative of about 20 years earlier. This may relate to a very bad harvest in 1630, which had left many starving. A number of freeholders in the village got together and set aside a piece of land and some cottages which could be rented out to raise money to support the poor. 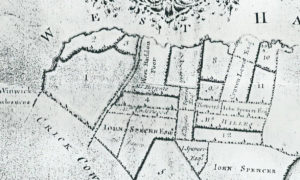 Later an adjoining close over the parish boundary in Silsworth, Watford, was added to the estate. It was administered by a group of trustees – some of their names are already familiar to us – Gulliver, Wills, Gutteridge, Worcester, Miller, Ward and Elmes.

The funds were also used for the public good of the village as a whole, for example, to pay for road repairs. There were no county councils in the 17th century. The inhabitants of West Haddon were responsible for the upkeep of all the roads and bridges in the parish – buying materials and paying labourers. Before the charity estate was set up the work would have been funded by a levy on all householders – like the Poor levy (the charity eased, but did not replace, the work of the Overseers of the Poor.) 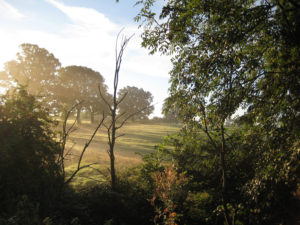 The charity fields lay on the south side of the road to Crick, down in the dip where a stream runs under the road and marks the boundary between West Haddon and Watford. They are still there, and still administered by village trustees.

But was the original initiative Samuel Clerke’s idea, and did he put up the money to buy the land? That’s what the dispute was about.