On the day of the fire, John Warde and his wife Elizabeth had buried their daughter Clement. And the following day they buried their son James.

It’s just possible that the children were casualties of the fire, but it seems unlikely that funerals would have been arranged quite so quickly in the aftermath of the disaster.

How old were Clement and James? The earliest entries in the baptisms register date from 1653 and their names don’t appear there, so they must at least have been older than four. Was it accident or illness that killed them? Why were they not buried on the same day? So many questions and no answers. But the loss of both children and their house and belongings all within a few days must have left John and Elizabeth reeling. 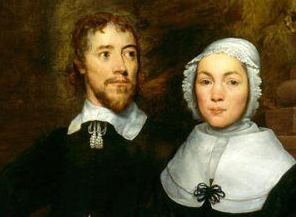 We know very little about the couple except that John was a small farmer. Records of various property transactions in the years running up to the fire show him selling a number of parcels of land in West Haddon. Around 1631 he had joined with his father Thomas in the sale of about 10 acres to Robert Miller for £23. Then in the 1640s he sold about 15 acres to Edward Clarke – but we don’t know how much money changed hands there – the purchase was simply mentioned in Edward’s will in 1649.

In 1650 John sold a house with a little yard and one bay of his barn to his neighbour Mark Bonner, for £17. And the following year he sold a close of pasture with Sandy Lane to the East and Nathaniel Brabson’s close to the south. (Subsequent deeds in the bundle suggest that the pasture was behind the houses on the corner of Northampton Road – aka Sandy Lane – and High St.) He sold it, presumably for grazing, to Samuel Newman the butcher, for £24. The following year Samuel Newman sold the same close to Thomas Kirtland, for £28. There must be another story there…

There is no evidence to suggest that John and Elizabeth were still living in the village in the years following the fire. Did they move away to make a fresh start and try, at least, to put the terrible memories of 1657 behind them?